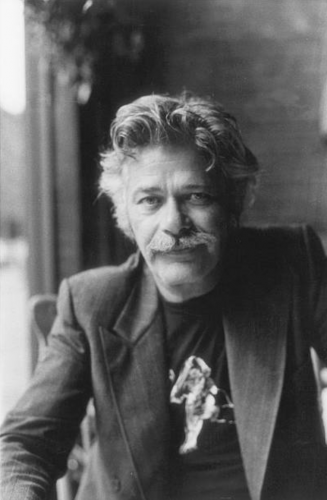 John Chamberlain was born in 1927 in Rochester, Indiana, and grew up mostly in Chicago. Following his service in WW2, Chamberlain attended the Art Institute of Chicago before finishing his education at Black Mountain College in 1956. The following year, after moving to New York, Chamberlain became an almost instant sensation after unveiling the first of many sculptures involving the assemblage of old scrap metal from cars. Through these sculptures, he is largely credited with translating the Abstract Expressionist style of painting into three dimensions, which has previously been contained to two dimensional canvases. Donald Judd stated in 1962 that John Chamberlain was the greatest sculpture alive, under 40.

Much of Chamberlain’s career was devoted to sculpture. Yet the artist also experimented with other mediums, such as painting, which he began in 1963, film, which he began in 1967, and photography, which he took up in the last decade of his life. Additionally, Chamberlain also created prints throughout his long career, especially in the latter half of his life. Chamberlain was well exhibited before and after his death in 2011 in both group and solo shows, and his works are contained in several major museum collections around the world. He received a major retrospective at the Solomon R. Guggenheim Museum in New York in 2011.