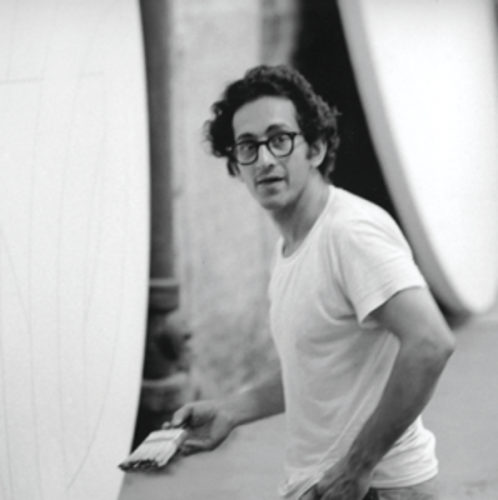 Frank Stella was born on May 12, 1936 in Malden, Massachusetts. Stella was exposed to art at an early age by his artistically inclined mother, as well as when he attended the Phillips Academy. However, it wasn’t until he began study at Princeton University, and frequently visited the galleries in nearby New York, when he really began to mature as an artist. He credits Barnett Newman and Jasper Johns as his early influences, which helped push the young Stella to experiment with flatter surfaces. Stella’s early works were unique in that they were divorced from both emotion and gestural brushstrokes. Stella has even claimed that his paintings are just “a flat surface with paint on it – nothing more.”

A similar philosophy applied in Stella’s prints. Beginning the mid-1960s, Stella has worked extensively with print making through a variety of printing techniques. His prints followed a similar mindset and remain very flat, free of any gestural lines, and contain no psychological allusions.

Stella has seen great success even from his early days. He remains the youngest artist to ever have received a career retrospective at MoMA in 1970. His works and career have been subject to countless museum exhibitions around the world, with his works in many of these museum’s permanent collections. Stella also has received many awards and distinctions including the National Medal of Arts in 2009. He continues to live and work in Greenwich Village, New York.