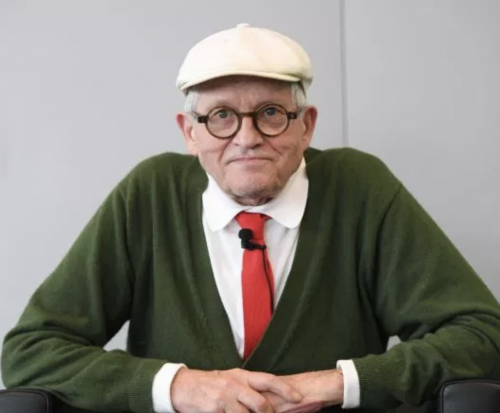 Hockney was born in Yorkshire, England in 1937. He first came to public prominence in the early sixties, as a post-graduate student of painting at the Royal College of Art in London. He experimented with numerous styles and became one of the most important portraitists of his era, renowned for depictions of family and people he met in his extensive travels. His work demonstrates a wish to uphold the human figure as a fit subject of painting, as well as an interest in imagery drawn from the urban environment. Despite his shouting 'I am not a Pop artist' during a private view party in 1962, Hockney's student work is conventionally seen as contributing to the development of Pop Art in Britain. In 1963, he had his first solo show at the Kasmin Gallery in London.
In 1964, Hockney moved to Los Angeles. In that year a swimming pool first appeared in the seminal painting. Over the next several years, portraiture and photography primarily occupied the artist, and he developed an intimate and powerful naturalism in this period.

Hockney abandoned painting for a time in the mid-seventies to concentrate on drawing and print-making. Not many paintings were produced during the early eighties either, the artist preferring to spend his time constructing collages from photographs. These photo-collages were recently exhibited in a retrospective of the artist's photography at the Museum of Contemporary Art, Los Angeles.
Hockney's originality as a printmaker was apparent by the time he produced A Rake's Progress, a series of 16 etchings conceived as a contemporary and autobiographical version of William Hogarth's visual narrative. Hockney's large body of graphic work, concentrating on etching and lithography, in itself assured him an important place in modern British art.