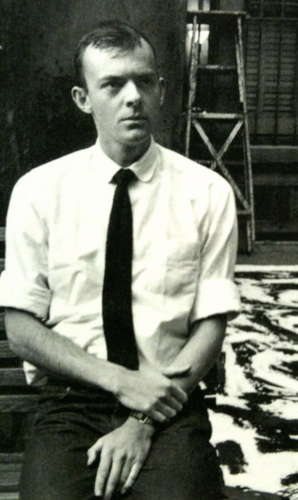 Cy Twombly was born in 1928, in Lexington, Virginia. From 1948 to 1951, he studied at the School of the Museum of Fine Arts, Boston; Washington and Lee University, Lexington; and the Art Students League, New York, where he met Robert Rauschenberg. At Rauschenberg's encouragement, he attended Black Mountain College, near Asheville, North Carolina, in 1951 and 1952, where he studied under Franz Kline, Robert Motherwell, and Ben Shahn.
The Kootz Gallery, New York, organized his first solo exhibition in 1951. At this time, his work was influenced by Kline's black-and-white gestural Expressionism, as well as by Paul Klee's childlike imagery. In 1952, Twombly received a grant from the Virginia Museum of Fine Arts that enabled him to travel to North Africa, Spain, Italy, and France. Upon his return in 1953, he served in the army as a cryptologist. From 1955 to 1959, he worked in New York and Italy, finally settling in Rome. It was during this period that he began to create his first abstract sculptures, which, although varied in shape and material, were always coated with white paint.

In Italy, he began to work on a larger scale and distanced himself from his former expressionist scribbles, moving toward a more literal use of text and numbers, drawing inspiration from poetry, mythology, and classic history. He subsequently created a vocabulary of various signs and marks, sometimes sexually charged, that read on a metaphorical level rather than according to any form of traditional iconography.
Twombly was invited to exhibit his work at the Venice Biennale in 1964. In 1968, the Milwaukee Art Center mounted the first retrospective of his art. The artist has been honored by numerous other shows, including major retrospectives at the Kunsthaus Zurich in 1987; the Musee National d'Art Moderne, Paris, in 1988; and the Museum of Modern Art, New York, in 1994, with additional venues in Houston, Los Angeles, and Berlin. In 1995, the Cy Twombly Gallery opened in Houston, exhibiting works made by the artist since 1954. Twombly died in 2011.