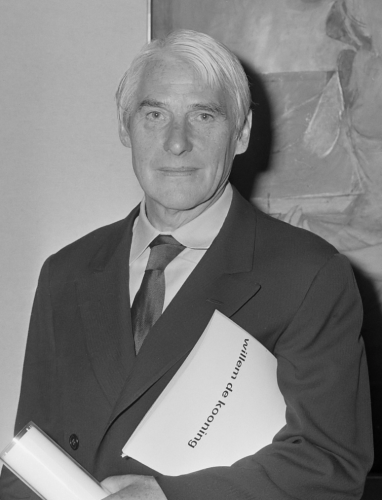 Willem de Kooning was born in 1904, in Rotterdam. From 1916 to 1925, he studied at night at the Academie voor Beeldende Kunsten en Technische Wetenschappen, Rotterdam. De Kooning came to the United States in 1926 and settled briefly in Hoboken, New Jersey. He worked as a house painter and moved to New York in 1927. In the late 1930s his abstract as well as figurative work was primarily influenced by the Cubism and Surrealism of Pablo Picasso.
In 1938 de Kooning started his first series of Women, which would become a major recurrent theme. During the 1940s he participated in group shows with other artists who would form the New York School and become known as Abstract Expressionists. De Kooning's first solo show, which took place at the Egan Gallery, New York, in 1948, established his reputation as a major artist; it included a number of the allover black-and-white abstractions he had initiated in 1946. The Women of the early 1950s were followed by abstract urban landscapes, Parkways, rural landscapes, and, in the 1960s, a new group of Women.

In Rome in 1969 he executed his first sculptures-figures modeled in clay and later cast in bronze-and in 1970 he began a series of life-size figures. In 1974 the Walker Art Center, Minneapolis, organized a show of de Kooning's drawings and sculpture that traveled throughout the United States, and in 1978 the Solomon R. Guggenheim Museum, New York, mounted an exhibition of his recent work. In 1979 de Kooning and Eduardo Chillida received the Andrew W. Mellon Prize, which was accompanied by an exhibition at the Museum of Art, Carnegie Institute, Pittsburgh. De Kooning settled in the Springs, East Hampton, Long Island, in 1963. He was honored with a retrospective at the Museum of Modern Art, New York, in 1997. The artist died in 1997, on Long Island.