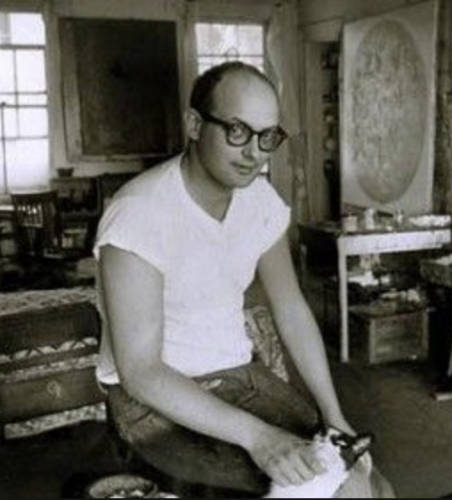 Sol LeWitt was born in 1928 in Hartford, Connecticut. After receiving a B.F.A. from Syracuse University in 1949, he traveled to Europe where he was exposed to Old Master painting. LeWitt moved to New York City in the 1950s and pursued his interest in design at Seventeen magazine, where he did paste-ups, mechanicals, and photostats. Later, for a year, he was a graphic designer in the office of architect I.M. Pei. Around that time, LeWitt also discovered the photography of Eadweard Muybridge, whose late 1800s studies in sequence and locomotion were an early influence. These experiences, combined with an entry-level job he took in 1960 at The Museum of Modern Art, would influence LeWitt an artist.
The Museum of Modern Art, New York gave Sol LeWitt his first retrospective in 1978ᇣ. The exhibition traveled to various American venues. Other major exhibitions since include Sol LeWitt Drawings 1958 - 1992, which was organized by the Gemeentemuseum in The Hague, The Netherlands in 1992 which traveled over the next three years to museums in the United Kingdom, Germany, Switzerland, France, Spain, and The United States; and in 1996, The Museum of Modern Art, New York mounted a traveling survey exhibition: Sol LeWitt Prints: 1970 - 1995.

In recent years the artist has been the subject of exhibitions at P.S. 1 Contemporary Center, Long Island City (Concrete Blocks); The Addison Gallery of American Art, Andover (Twenty-Five Years of Wall Drawings, 1968 - 1993); and Wadsworth Atheneum Museum of Art, Hartford (Incomplete Cubes), which traveled to three art museums in The United States.
Sol LeWitt's most recent retrospective was organized by the San Francisco Museum of Art in 2000. The exhibition traveled to the Museum of Contemporary Art, Chicago, and Whitney Museum of American Art, New York. He died in April, 2007.