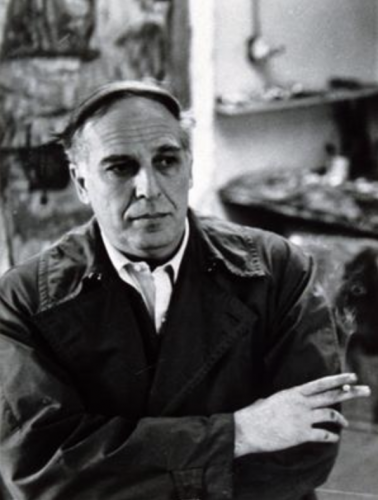 Philip Guston was born on June 27, 1913 in Montreal, Canada. He moved to Los Angeles at a young age and ended up enrolling in the Los Angeles Manual Arts High School, alongside Jackson Pollock. The two quickly became friends and were expelled after co-authoring an article highly critical of the school. Guston then went on to study at the Otis Art Institute, but after a year, felt that the academic environment was oppressive and not conducive to his own education. He eventually found early success as a mural painter across the United States and Mexico throughout the thirties and forties. He also taught art at the University of Iowa and began to have his first gallery shows, to great acclaim.

Guston became famous as a member of the New York School of abstract expressionism. It was during this time that Guston developed a limited color palette of neutral colors, which would be a defining feature for the rest of his career. By the late 1960s, Guston was tiring of abstract expressionism, which was starting to look dated. He began to turn to a more representational, but still abstract, cartoonish style. While this style was initially derided by critics and the art establishment, artists, such as de kooning quickly began to understand the importance of his paintings, drawing, and prints, which had the capacity to provide cultural commentary through seemingly mundane objects. Guston died in 1980, and by then, he was a widely celebrated figure, whose works are now in major museum and private collections across the world.