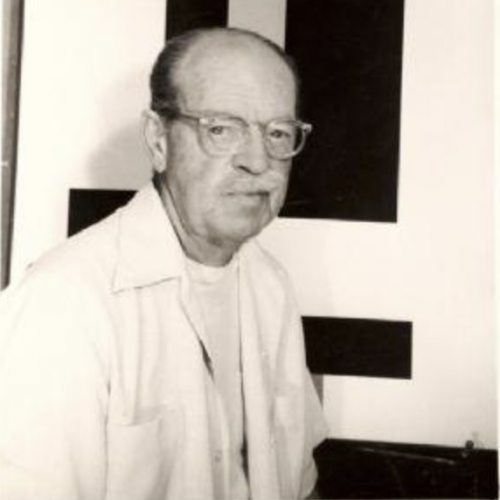 John McLaughlin was born in 1898 in Sharon, Massachusetts. His mother had a very large collection of Japanese objects. McLaughlin's education and exposure to Japanese culture are some of the early influences that began to shape his personal interests and profoundly affected his professional choices later in life.
He moved to Japan in 1935 and McLaughlin studied Japanese art and language, which was a rare opportunity for an American during this time.
Upon returning to Boston in 1938, McLaughlin opened an art gallery called The Tokaido, Inc. Here he sold Japanese prints and imported objects from China and Japan.
In 1946, McLaughlin moved to Dana Point in Southern California where he became one of the few American abstract artists. He created bilateral paintings with symmetry on the left and right sides of the canvas using vertical and horizontal rectangles.

By creating a work that is completely abstract, McLaughlin strove to interact with the viewer and show the relationship of man to nature, without telling them what to think. McLaughlin's first group exhibition was in 1949 at the Los Angeles County Museum. His first solo exhibition was in 1952 at the Felix Landau Gallery in Los Angeles. His many experiences, working with Japanese and Japanese-Americans, traveling abroad, and viewing Chinese and Japanese works of art, all further developed the philosophy of life that were the driving force behind his paintings.